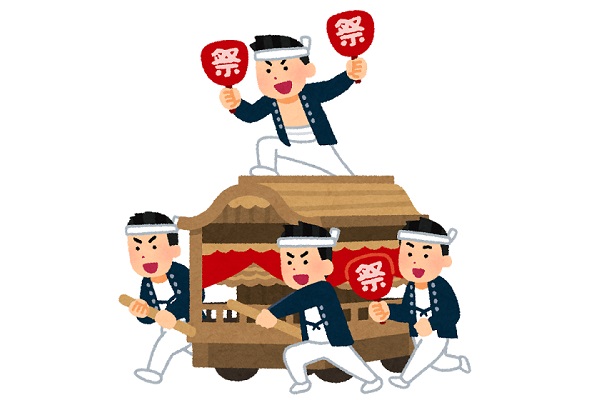 Matsuri, in origin, is a traditional event held by almost every Shrine in Japan to celebrate its deity, to show gratitude and to prayer for fertility. It has developed varies forms over time. Now we can see many kinds of Matsuri, some are annual event that held by local governments, some are cultural events held by organizations, some can be a small-size casual gatherings that organized for kindergarten kids, neighbors, residents from same condominium.

Whereas an authentic and traditional Matsuri, always features with procession of local shrine’s Kami (Shinto deity), being carried in Mikoshi(palanquins), treading through the town. It is said, it is the only time of the year that Kami to be outside of shrine. There are some decorated, Taikodai(floats), which mean to invite Kami to come out and stay willingly, accompany the Mikoshi to parade. These floats usually gorgeously decorated with dolls and flowers.

It is very often to see Bon Odori, a marching dance with Japanese folk music (Ondo) that everyone can participate at Matsuri. This dance is to memorialize the ancestors and usually performed during Obon period, middle of August. Dance movement is quite simple and goes with repeatedly played music, one can join the crowd and dance with others by just mimic them. It is definitely a joyful experience to participate Bon Odori at Matsuri. The most famous three Bon Odori in Japan are Nishima Odori in Akita prefecture; Gujo Odori in Gifu prefecture, Awa Odori in Tokushima prefecture, which attract crowds of tourists every year.

These are the top three most renown Matsuri in Japan.

神田明神の神田祭
Kanda Matsuri in Tokyo
It is the festival of Kanda Myojin Shrine and one of the historical festivals started from Edo Period. Held in May with full activities in odd-numbered years, a simplified version in even-numbered years. This festival consists of a number of events over a week, but the major ones take place over the weekend around May 15th. The procession through Tokyo center area and the parades of portable shrines (Mikoshi) attract numerous tourists.

八坂神社の祇園祭
Gion Matsuri in Kyoto
It is the festival of Yasaka Shrine.It takes place over the entire month of July. There are many different events, but the grand Yamaboko procession on July 17 is particularly impressive. The rudiment of Gion Matsuri dates back to 869, in a form of Goryoue, a festive ceremony held in memory of the spirits of the dead. The history is so long that it celebrated the 1150th anniversary of the festival in 2019.

Interesting thing is, the major events of Gion Matsuri are not exactly held in the Gion area but on the opposite side of it. Among myriad events and activities, the Yamahoko parade is the only one that was designated as an important intangible folk cultural property. Three-day pre-event Matsuri, and three-day post-event Matsuri, so called Yoiyama procession, together with Yamahoko parading, are well-known to be the most exciting ones.

大阪天満宮の天神祭
Tenjin Matsuri in Osaka
It is the festival of Tenmangu Shrine and started on first of June in 951.The major event takes place on July 24 and 25. Different with Kanda Matsuri and Gion Matsuri, Tenjin Matsuri not only has land procession, but also has a river procession with fireworks performance. Tenjin Matsuri in particularly honors its principle deity Sugawara Michizane. The whole event is about inviting the spirit of Sugawara Michizane to go out of the shrine, parading with him, delight him with many types of performances and attractions, then respectively leading him back to the shrine.

For ordinary people, Matsuri is the only occasion to enjoy the exuberant atmosphere among numerous people, walking shoulder to shoulder on the streets. We love going to Matsuri because of it makes us completely forget about the summer hotness and the monotonous life. When summer time comes, it means the summer festival season is getting closer. However, the coronavirus crisis, yet not finished, stopped all festivals since last year. When the situation is getting better and Matsuri is back to us…I wouldn’t miss it for the world.