Have you ever taken a night sleeper train in Japan? I would guess many people don’t even aware of sleeper trains still exist in Japan. At least I had no idea before took the train during Golden Week.

The train I took was the Sunrise Express Izumo bound for Tokyo from Osaka station. For the same route, I have taken so many times of the Shinkansen bullet train and never would have guessed one day, I would take a night train and actually sleep on it during my journey. We took on the train at midnight at 22:29. Luckily, we could stay at a relative’s place until the right time to depart. Otherwise, we would have to find a place to stay to kill the time until late night. When the train quietly slide into the station, I found it’s in a modern look, not as retro as I thought it would be. The crowds on the platform immediately became excited, regardless who is about to ride the train and who is not, everyone just kept taking photos. Affected by others’ enthusiasm, me myself couldn’t help not to taking any.The train looks like this: 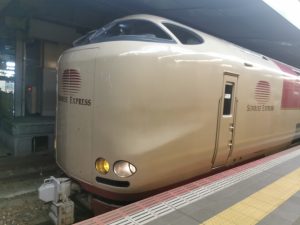 The Sunrise Express (Sunrise Seto and Sunrise Izumo) became the only regular night sleeper train in 2016. The train departures from Tokyo with 14 cars to reach Okayama, then separate, each with 7 cars, the Sunrise Seto goes to Takamatsu, while the Sunrise Izumo heads to the north to Izumo. The train stops at Osaka only when traveling eastwards when bound for Tokyo. It is actually renown and popular among the train fans. It is rather difficult to get the tickets during weekends or holiday season. The train offers, single berth (Single deluxe, Single twin, Single, Solo), twin berth (Sunrise twin, Single twin), and most reasonable no extra charge Nobinobi zaseki seat ——it is a shared room with thick carpeted floor that allow people to sleep on it one next to another, with partitions on the head side.

Mine was the most common one, single berth and it was the only type I could get. 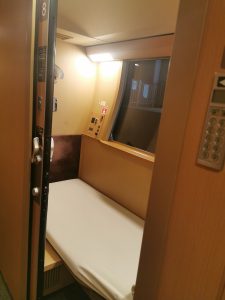 A small room just enable to let me to lay down and sleep. No place for a suitcase.

Since my eyesight is under the platform ground level, I looked up through the window and saw some local trains passing by mine, people inside were sitting still on their seats backs towards me. It felt like, me and those passengers were so close nevertheless so far from each other. Everyone stayed still but were rapidly moving at the same time. This sense of surreal has become a charming unprecedent experience for me.

Where to buy tickets.