The video of “23rd Special Online CST International Salon” has been released.

You can watch the video recording of the webiner for the day on YouTube from “here“. 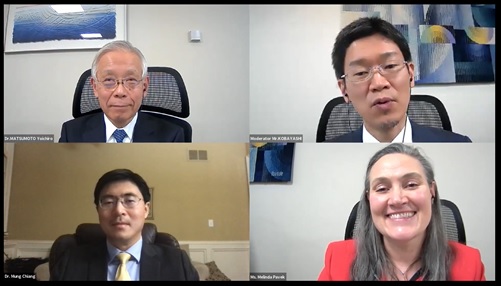 10：27－ Exchange of views about themes or topics

Mung Chiang is on an IPA detail at the U.S. Department of State from Purdue University, where he is the John A. Edwardson Dean of the College of Engineering and the Roscoe H. George Distinguished Professor of Electrical and Computer Engineering. Prior to July 2017, he was the Arthur LeGrand Doty Professor of Electrical Engineering at Princeton University.
His research on communication networks received the 2013 Alan T. Waterman Award, the highest honor in the U.S. to scientists, engineers and social scientists under the age of 40.
A recipient of a Guggenheim Fellowship and the Institute of Electrical and Electronic Engineers’ Kiyo Tomiyasu Technical Achievement Award, he founded the Princeton Edge Lab in 2009, and co-founded a few startup companies in mobile data, the Internet of Things and artificial intelligence. A recipient of the American Society of Engineering Education’s Frederick E. Terman Award, his textbook “Networked Life,” popular science book “The Power of Networks,” and online courses have reached hundreds of thousands of students.

Dr. MATSUMOTO was born in 1949.
He received his Doctoral degree from the University of Tokyo in Mechanical Engineering in 1977.
He became Lecturer of the same University in 1977, Associate Professor in 1978 and full professor in 1992.
He served as Dean of School of Engineering from 2006 to 2008, and served as Executive Vice President from 2009 to 2015.
He is now Professor Emeritus of the University of Tokyo.
From 2015 to 2018, he was Executive Director of RIKEN.
He was appointed as President of Tokyo University of Science in April, 2018.
On April 1, 2020, Dr. MATSUMOTO assumed the post of the Science and Technology Advisor to the Minister for Foreign Affairs.
He is working on promoting Science and Technology Diplomacy.

Back to News Top