Kanto and Kansai in Japan 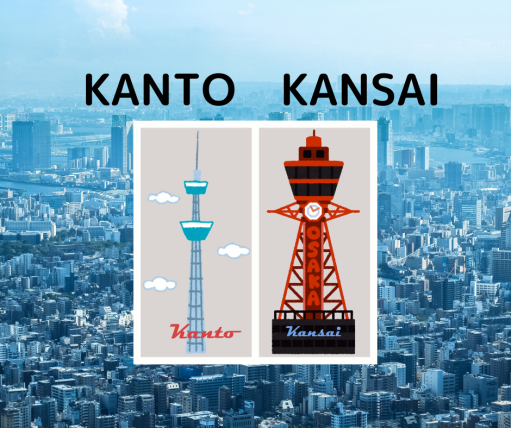 Suppose you are living in Honshu in Japan, the largest island of Japan just like me, more or less you must have heard people talking over the differences between Kanto area and Kansai area. Taking the most obvious example, the position to stand on the escalators differs in the Kanto and Kansai regions, with people standing on the left side in Tokyo and on the right side in Osaka.

These two major metropolitan areas have historical connection with the relocation of the capital city in 1868, with the political center moved from Kyoto to Tokyo. Until now, Tokyo and Kyoto are still the most nationwide recognized, prosperous, most populated areas in Japan.

The most common way of traveling between the two areas would be taking the Shinkansen train. Only a few hours travelling would take you into a slightly different world. The first thing you would notice is the language, Kansai accent sounds so much more melodic, can be distinguished easily. It is also said Kansai dialect phonetically characterized with stronger vowels, in compare with Kanto dialect with stronger consonants.

The food tastes different too, it is commonly known as Kanto has a strong taste and Kansai has a mild taste. It is said, During the Edo period in the Kanto region, the strong flavors favored by the Samurai. In the Kansai region, on the other hand, the refined traditional food of the court nobles.

As for the differences in terms of culture, the first thing that surprises people from the Kanto region when they visit a Sento public bath in the Kansai region, In the Kanto region, the bathtub is usually located behind the showering area, at the end of the room. In Kansai, on the other hand, the bathtub is usually located in the center of the room.

Many people believe Osaka people to be more straightforward, humorous, and unpretentious. Tokyo people, on the other hand, are more serious and take into account of the distance and territory between each other. What is your opinion about it? Perhaps the best way to find the answer is to make many Kanto or Kansai friends.